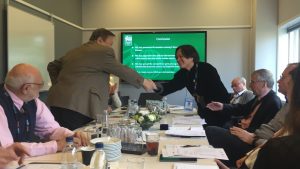 IMSA held its first Executive Board Meeting in 2017 on April 5, in Aarhus, Denmark. On the agenda were the elections of new Board members and officers, the consideration of applications from perspective members, the planning of the next chapter of the IMSA Elite Mind Games, the planning of the restoration of the World Mind Games, and the continued discussion on revising the IMSA Statutes.

Some of the key outcomes are:

• Mme. Zelan Chen was elected President of IMSA.
• Officers and members of the Board are elected: (* – new member)
o President – Zelan Chen (Vice President of WXF; China)
o Deputy President – Harry Otten (President of FMJD; the Netherlands)
o Secretary General – Thomas Hsiang (Vice President of IGF; USA)
o Treasurer – Marc Depauw (Treasurer of WBF; Belgium)
o *Vice President – Nigel Freeman (Executive Director of FIDE; Bermuda)
o *Vice President – Frank Ng (President of MIL; China)
o Board Member – Giannarigo Rona (President of WBF; Italy)
o *Board Member – Yi Wang (Secretary General of IGF; China)
o *Board Member – Adrian Siegel (Treasurer of FIDE; Switzerland)
o *Board Member – Jacek Pawlicki (Tournament Coordinator of FMJD; Poland)
o Founding President (non-voting) – José Damiani ( former President of WBF; France)
o Executive Director (non-voting – Geoffrey Borg (CEO of FIDE; Malta)
• A new branch office of IMSA will be established in Beijing.
• A contract has been signed to extend the IMSA Elite Mind Games held in the City of Hui’an for three more years. The next event is tentatively set for Dec. 17 to 23, 2017.
• The restoration of the World Mind Games is being carried out in collabroation with SportAccord. Effort will be immediately launched to identify the next host city.
• The Mahjong International League (http://mahjong-mil.org/), or MIL, has been admitted as the sixth member of IMSA.
• The Confederation of Card Games (CCG) has been admitted as an observer.
The next meeting of the Board is scheduled during the second IEMG in Huai’an City, China, in December 2017.