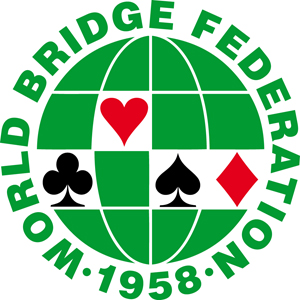 The World Bridge Federation (WBF) was formed in August 1958 by delegates from Europe, USA and South America. The WBF is recognized by the IOC as an International Sports Federation in 1999.

In 2000 the WBF became a full member of the GAISF (now SportAccord).

The World Bridge Federation has shown strong and steady growth and its membership now comprises 130 National Bridge Organizations (NBOs) on 5 continents with approximately 1,000,000 affiliated members who participate actively in competitive bridge events (locally, nationally and internationally). Based on many positive aspects of bridge the WBF promotes it as a sport for young and old.
[divider_dots]wxcvwxcvwxcvwxcv[/divider_dots]

Bridge is a game of communication between a pair of players, playing in partnership, and their opposing pair. A contract is decided during the first phase, called the auction. Then the second phase involves the play of the cards and is based on information gained, together with the probabilities of card distribution.
Duplicate bridge gives a comparison of results obtained by different pairs holding the same cards, and thus no luck is involved. It is, in reality, a game of skill and judgment, a true sport.

Through its World Educational Foundation, the WBF has developed a teaching programme especially for schools supported by UNESCO.
This programme is actively used in many countries (US, France, Italy, Germany, Netherlands, Poland, China, Indonesia…).