The second SportAccord World Mind Games will be held

In the Beijing International Convention Centre
The Beijing Continental Grand Hotel will be the official hotel.
Five Mind Sports will participate in the SportAccord World Mind Games: Bridge, Chess, Draughts, Go and, on this occasion, Xiang Qi.

The event will feature the best players worldwide – in total around 170 top players- and will be accompanied by a cultural program. Winners, medalists and players will receive attractive prize money depending on their ranking.

The format will be: 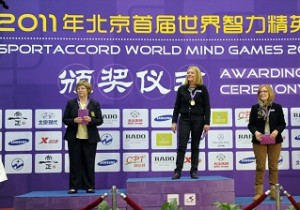 The Bridge competitions at the SportAccord World Mind Games are held under the auspices of the World Bridge Federation. 24 men (China/Netherlands/Sweden/USA) and 24 women (China/France/Great Britain/USA) in total will compete in individual, pair and team events.

Teams are comprised of between 4 and 6 players, often with a non playing Captain. Four players (i.e. two partnerships) play at any one time with one team playing as North South at one table, and at East West at the other. Scores can then be compared and a winning team established.

Pair event: 16/17 December
In a pair event, the partnerships are fixed, one player playing with his or her partner for the duration of the event, which may comprise several sessions. A session is normally 24 or 27 deals, although it can be more or less. Because the partners will be familiar to each other, more complex bidding systems can be used with all relevant information about these being available to the opponents throughout the event.

Individual event: 18/19 December
Participants in an individual event play a set number of deals (usually 2 or 3) with one partner, before moving on to play with a different partner for the next few deals until they have played with as many other players in the competition as possible. Results are then computed to give an overall winner. Individual events are usually played using a very simple bidding system. 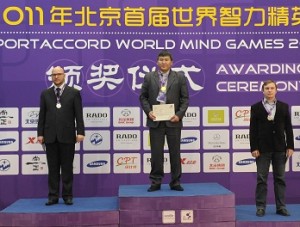 The Chess events at the SportAccord World Mind Games 2012 are under the auspices of the International Chess Federation (FIDE).

32 athletes, 16 men and 16 women, will compete for the medals.
The disciplines on the programme will be for both men and women 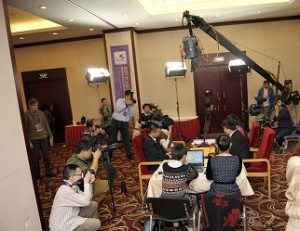 The Go events at the SportAccord World Mind Games 2012 are held under the auspices of the International Go Federation (IGF). Twenty-nine players (16 men and 12 women) will participate.

The Individual event will feature a double elimination with seven rounds in total. The time limit for each side is 1 hours, with three 30-second byo-yomi periods.
Eight pairs will compete in the Pair Go event. It will be a single elimination with two rounds each day and three rounds in total. The time limit is 1 hour each side, with three 30 second byo-yomi periods.
The surprise is that nearly 80% of the field is new: the only returnees from last year are Li He (China), Choi Chulhan and Park Jeonghwan (Korea), Mukai Chiaki (Japan), Joanne Missingham (Taipei), and Vanessa Wong (Great Britain). This reflects the astounding rate at which young players have been rising to the top all over the world during the past year or so. Nearly one-third of the contestants are under 20, and all but five of the rest are under 30.
Qualification – In the Asian zone, China used its internal rating system to select its two best women and two best men, and added LG Cup-winner and world meijin Jiang Weijie as its third man. Korea and Chinese Taipei held qualifying tournaments in which young players did conspicuously well. Japan followed their lead by entering five of its best young players.
In the European zone, three men selected in a special qualifier held in Lille in August are joined by the top three finishers in the recent European Women’s Championship.
In the North American zone, two young Canadians won the men’s and women’s qualifiers, shutting out the United States.
Only in South America was youth denied: Argentina’s famed veteran Fernando Aguilar rebuffed five rivals from Argentina, Mexico, and Chile to become the first South American go player to compete in the SportAccord World Mind Games. 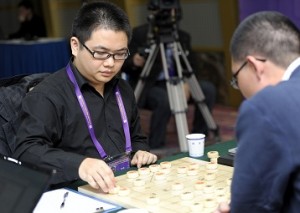 The Xiang Qi event is held in conjunction with the World Xiang Qi Federation (WXF). There will be an individual event for both men and women.

The men’s event, with 8 players, will be a single round robin, 7 rounds in total.

The women’s event, with 4 players, will be a double round robin, 6 rounds in total.
Time control is 60m + 30s/move, for both events.
WXF rules of Xiang Qi competition shall be adopted.

The winners of the online tournament in each sport will be offered a return air tickets to Beijing as well as full board and accommodation during the games. They will be able to watch and play with their champions

These Mind Sports are all about the power of the human brain, strategy, intelligence and the exercise of the mind. The players need to have a competitive attitude in order to rise to the challenge in such a Championship, and the environment is both exciting and challenging.

Live broadcast from Beijing
Daily live coverage of the 2012 World Mind Games will be available during the event.
To watch the daily four-hour video transmission of the 2011 edition, go to The Sports Hub channel www.youtube.com/thesportshubchannel.